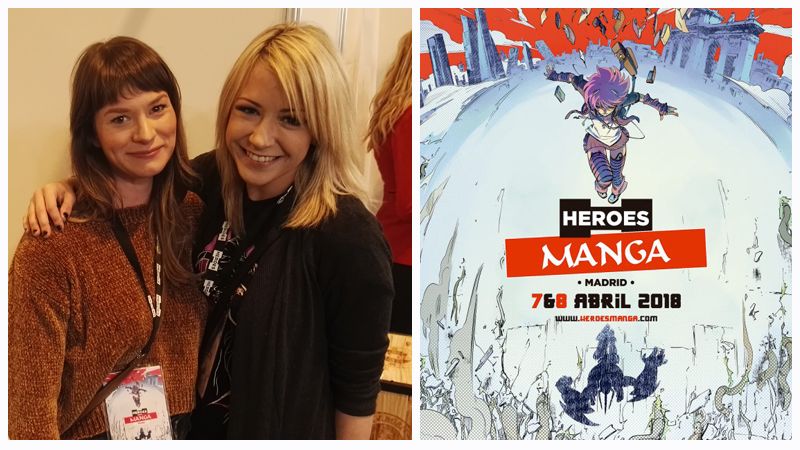 (Madrid, April 10th, O’kuroku).- This past weekend, during the Heroes Manga Madrid con, geek and otaku culture came together. Among the artists that were invited, the wonderful girls from RWBY, Samantha Ireland and Kara Eberle were in attendance, signing autographs, taking pictures with fans and also, granting us an exclusive interview.

Without much further ado, let’s begin with the questions.

How did you start in this business? Who contacted you to be a part of RWBY?

Kara: I was the receptionist at Rooster Teeth Productions, who created the show and Monty Oum, the creator, we were like best friends before RWBY was anything. And he literally came up to my desk one day and said, “hey, I have an idea for a show, I think you’d be great as one of the main characters”, and I said, “What? Okay, I’ve never done any of this before but this sounds so exciting” and I literally just got out a notebook and he started talking about it, he had so many ideas, and I was like “let me write all of this down.” And I finally wrote it down and I still actually have that notebook paper with all of these ideas and all of the team names he had before it had come out, so it’s really cool. Just the fact that he thought of me was interesting, and I didn’t think I’d actually be able to do it, in all honesty, but I practiced in my room, in my closet, recording myself with different voices for  like five hours, and it worked out great. But it was interesting being new to voice acting and them giving me a chance, and I’m so grateful for that.

Samantha: There was an open casting call for Rooster Teeth, which they obviously don’t do anymore it was before, like years, back in 2010…

Samantha: Oh, my God, yeah. Um, so there was an open casting call for all different projects that they were working on, which were live action and Red vs Blue, they were doing a prequel, so they were kinda getting new voices, and I got to audition.

Kara: ‘Cause you have a background at this…

Samantha: Yeah, I have my degree, I’ve been acting for a while, and so I got to audition and it just, it went well, and I booked CT, got to play CT on Red vs Blue and then I got to know Monty, and know the other animators… And I got the opportunity to audition for Nora, so, it just took off from there.

Did you audition for any other role besides Nora and Weiss?

Samantha: No, it was just for Nora.

Kara:  Just for Weiss, ‘cause that’s what Monty had pictured me as.

What does RWBY mean to you?

Kara: Everything. It’s really… It sounds… You know, but I’m not over exaggerating at all, it really… It’s changed my life, I mean, I wouldn’t be here, in Spain, it’s something that I’ll never, ever forget and I’m so grateful, and it’s so rewarding to meet people and fans and hear all of these stories, and know that they like the show, even it’s like… It’s great.

I mean, it’s impressive to know that it’s gotten so big, and in other countries, too, so, did you know that they’ve translated it to Japanese? Do you know the voice actresses that play your roles, have you heard them?

Kara: Yes! It was funny, two RTX ago, on our RWBY panel, the directors had surprised us, all four RWBY girls, we didn’t know that our voice actresses in Japan had recorded a video for us. And it was the coolest thing ever, we were like in tears, freaking out. I’ve never been to Japan, I’ve always wanted to go, and I also know Neith Oum, Monty’s brother, I’m really close with him, and he lives in Japan, so I talk to him over twitter all the time and he’ll send me like, pictures of the RWBY merchandise, they’re in stores, and I’m like: “This is so insane! That’s awesome!”

Today we had the pleasure to interview Samantha Ireland and Kara Eberle, voice actresses from the hit Rooster Teeth show, RWBY. They’re incredibly sweet and very passionate about the work they do. Stay tuned for the interview! #HeroesMangaMadrid #RWBY

How do you feel about the fact that it’s gotten so big?

Samantha: I mean, it’s surprising, it got so big so fast, too, you know? And a lot of times it takes time for that momentum but this kinda, man… it took off, I remember that first RTX, even, after it already premiered and the amount of people in that room, I was like: “Oh my God!”. And I think it’s just exciting to think that there are people who don’t even speak our language that watch it. That’s amazing. Not everyone gets to experience that in projects.

The fact that it got so big also helped you guys to travel abroad and gave you the opportunity to meet fans, how do you feel about that?

Do you think you and your characters have any similarities at all?

Kara: I think I’m… I mean, everyone always says that I’m more like Ruby in real life, than Weiss, just because I’m really hyper – if you can’t tell *laughs* – Lindsay always says that, too, “you’re  totally a Ruby” but I am like Weiss in ways, like, I like being a perfectionist when it comes to certain things, like reading my script I have a certain method that I use and there’s a process to it, so in that way I’m more like her, but on everything else I’m totally a Ruby.

Samantha: That’s nice, though, you can get to… choose a personality. But I’m… I’m a lot like Nora.

Kara: She is, for sure. And I love that.

Samantha: Yes. And I think that the aspects of her that I also kind of admire, I’ve been seeing a lot more on myself now I’ve gotten older, too; like her strength, her perseverance; so those are things that I don’t think she’s brought out of me, technically, but maybe I recognize them more on myself than I had previously. But I think we’re a lot alike. I think she’s got a lot more energy than I do, but… I love everything about her; I think I really admire her like a woman, too, a young woman.

Kara: It’s so great to see our characters grow, too.

That was another question, how do you feel about your character’s growth and importance in the show?

Kara: I am so proud of Weiss, you have no idea. Monty had told me in the beginning that she had a history, there is a deeper story to her, more than what people see on the outside. And that was something that I was really excited about, he even told me “If people don’t like your character, then that means you’re doing a good job.” And everyone tells me that, and it’s rewarding to hear. In the beginning Weiss was one of my least favorite and now she is my favorite character, and I’m like: “Yay!” I mean, they grow up and it’s great to grow with the character.

Samantha: I think, as an actor too that the writing has developed as well, as an actor you’re appreciative of that, that your character has grown and not just one mindset. That way you can also work on where they are mentally. Around volume 4 it was nice to see more of the background for Ren and Nora, even though we just got to see like a taste of Nora, but…

Kara: That was so sweet!

Samantha:  I know, that whole… story, I mean, it shows that these children aren’t really children, they had to be adults very quickly.

Kara: That’s a good statement; I just really got chills, look at that. They’re not just children, they’re adults, and they had to grow up very fast.

Samantha: And what that brings out of them has been truly remarkable to see in the storyline.

Going back a little, Kara, you commented that you liked Japan. Do you watch anime? Do you like it?

Kara: I do like it, but unfortunately I don’t have time to watch that much TV, there’s so much. But don’t quote me on that! People are going to hate me! *laughs*

Samantha: I don’t watch it either, but I have a lot of friends who love it, and to hear some of the stories that are being developed out of there is impressive. Very impressive, and the stories are very unique in themselves and they’re based in the human condition as well, even when it’s so fantastical it’s still comes from a place where it’s rooted.

Are you working on other series besides RWBY?

Kara: I work full-time, actually, and I do RWBY. I work full-time as an executive assistant at an animation studio, also in Austen, but then I also do RWBY and RWBY Chibi, of course. The Blaz-Blue Cross Tag Battle videogame that’s coming out… I cannot wait for it, you can see pieces of it online, and Lindsay and I have already recorded for that. I was in there for four hours, drenched in sweat…

Kara: I mean, since it’s a videogame, it’s like every hit has four different possible reactions, so even if it’s like: “Lightning!” but there’s a soft lightning strike, medium lightning strike, and you’re yelling the whole time! It’s crazy.

And this is the final question because we’ve run out of time: What is your recommendation for people who are starting out in the voice acting business?

Samantha: It’s something you can start right away. Get a microphone, you have a closet, I’m assuming, if not then you have like… find something you can put in front of it, but start doing it now. Voice acting could be done anywhere, and I think that’s why some people see it as a big challenge, but it’s really not. Get to know your voice, your own mechanics, and that way you know what your strengths and weaknesses are, and do commercial work, try anything, because it’s like, endless possibilities for voice acting, which is really exciting, your face isn’t going to stop you from being an ingénue, being a character actor, it’s your voice. I think it’s really fun. It’s my favorite of all of the acting.

Kara: Elizabeth Maxwell, who voices Winter in the show, I’ll say her answer is always great, she gives out great advice and it’s just, even googling voice acting workshops, you’ve gotta start somewhere, after doing the steps of practicing your voice, these voice acting workshops really work with you and prepare you for what to expect and it’s the first thing to get your foot on the door, even if you don’t understand the world. That’d be my advice, but I’ll give Elizabeth credit for that advice.

We had to conclude the interview earlier than expected, not only because Kara and Sam had to go sign autographs for their fans, but we also needed to record a special message for our writer, Shougo Amakuza, who was kind enough to select these questions for us. If it weren’t for him we wouldn’t have had such wonderful questions.

Samantha and Kara are incredibly sweet, outgoing and patient. They’re so charismatic they entranced everyone that attended their RWBY panel, where they answered some other questions from the public that attended the con. Some of them were even cosplaying as RWBY characters.

We thank Heroes Manga Madrid for the opportunity to meet and interview the girls personally, and I hope you enjoyed the reading!