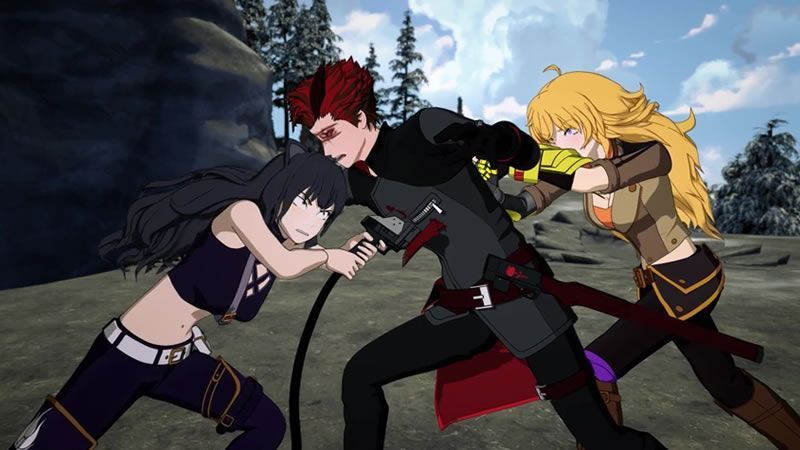 (Lechería, February 2, O’kuroku).- After a long delay I am finally back, so it is time for wrapping up everything that happened in the last 4 episodes of our beloved show, RWBY.

Let us start with episode 9. Well, I loved to watch Mercury finally having some character development. He really needed it and I think it was good, plus we could understand a little bit better not only his motivations, but Emerald’s too. Not to mention the outstanding performance of Tyrian, my goodness he is a great character.

Of course I cannot dodge the ball regarding Pyrrha’s scene. The title of this review refers to some moments inside these 4 episodes, and this scene is one of them. It was awesome to finally watch Jaune getting some closure on Pyrrha’s death. He was just stuck in that moment and he desperately needed to move on.

I obviously cried on that scene, it really hurt me, but I am aware this was necessary for the greater good, and the results were amazing. Jaune is now a better person and a better leader.

By the way, it was about time that Ruby pushed some sense on Qrow. He was just falling and falling in an endless pit of self-pity, and he pretty much needed a couple of slaps on the face to react. Speaking of character development, this volume has been doing a great job in that department, especially on our little red, who is not little anymore.

Let us move to episode 10. Firstly, we got more funny moments with Maria Calavera who is clearly taking the comic relief role in the show alongside with her nemesis Caroline Cordovin. Secondly we had another great moment of Ruby’s growing up process. Man, we were right, she definitely needed her character development. I am happy to see her becoming an even greater person thanks to all this process.

Lastly, we got the beginning of another closing cycle. Yes, I am talking of Blake and Adam’s fight. It was obvious that he was going after her, and, in his eyes, payback time just arrived. By the way, the choreography of the fight was good.

Now it is time for episode 11 to shine. Finally, the fight against Caroline got serious and the little lady proved to be a tough opponent. The entire fight was thrilling thanks to a great background music and a gorgeous animation. CRWBY is doing what they want with Maya by now. It was definitely a good decision to abandon Poser.

Yes, I am aware the fight had some funny moments, but overall it was a tough and serious one. Besides, I am glad to see RWBY embracing its roots. This show was always about tons of action mixed up with funny moments, we must not forget that.

Regarding Blake and Adam’s fight. The entire sequence was astonishing, but the best part was the conversation they had. In a twisted kind of way, both were having a closure in their relationship, and they needed it badly.

And speaking of unfinished business, it was really cool that Yang joined the fray since she also needed to get some closure with Adam. After all, her PTSD is tied closely to him. Of course, this fight was also marvelous, and we got to know both Adam’s semblance and face. The former was really a broken one, and the latter allowed us to understand why he hated humans. It is traumatic being literally labeled as a property.

With that, everything was served to episode 12. I assume bumblebee fans were ecstatic with episode 11’s last scene and with the entire sequence of Adam, Blake and Yang’s fight in this episode. In fact, me being a Blacksun shipper enjoyed everything as well.

However, let us talk about the fight against Caroline first. Despite all the humor, Cordovin showed that she was not as dumb as everybody thought. It was nice that she saw through Oscar’s plan, which forced Ruby to put her live on the line in order to win the battle. Again, I have to praise CRWBY for a superb job with the whole battle sequence.

Speaking of closing cycles, for Ruby, the moment when she asked Qrow to trust her marked a new path for her. The way in she did it showed that she is definitely not a kid anymore, and not only her uncle but us as audience will have to start seeing her in a new light.

Time to move for the other fight. As I said before, the conversation was better than the choreography, which was amazing by the way. This sequence wrapped things up amongst them, and I hope they can move on now. Yes, I am including Adam because I am following the old rule “no body, no death”. Cinder proved that statement right not too long ago, although I admit that the probability of him being alive is slim.

Finally, it was obvious that there was going to be a final boss for this volume and for that role we got a Godzilla-like Grimm. Sadly, Caroline’s mecha is pretty much out of order, so Ruby and friends will have to step in and face this new enemy. Perhaps, this is the key for the stubborn lady to let them go to Atlas.

Before closing this review, please allow me to take some lines to talk about Yang and Blake killing Adam. I know a part of the fandom is really upset because of it since they now believe the ladies cannot be considered heroes anymore. Well, I agree to disagree with those people. A hero cannot be defined by one action, but by his entire record. Besides, you have to keep in mind some mitigating circumstances: 1) Yang is suffering PTSD thanks to Adam, 2) Blake was manipulated by Adam for a long time, 3) They were in the middle of a very tough fight, so there was a lot of adrenaline involved and 4) Yes, Adam was defeated, but despite that he went for the killing when he tried to reach the blade. In all honesty, you cannot be so pragmatic in this scenario. Well, that is my opinion regarding that matter. Let us go back to the review.

Jaune, Ruby, Blake, Yang, Adam. In the end, as it is written in the title, these episodes were all about closing cycles. See ya in my next review.

If you want to watch the show you can do it in the official website.