(Lechería, December 4, O’kuroku).- I think only one word can define this episode of RWBY. Fanservice. However, that was premium quality fanservice. Are you in for an ice cream?

This episode had two acts, but the second one was somehow buried by what happened in the first one. Having Neo back was just awesome. Fans were expected her return for years, literally, and the happiness of watching her on screen again was beyond words.

However, let us talk about the second act first, since some interesting things happened in it. The farm where they arrived looked pretty eerie, so it did not surprise me at all when they found out all the people where dead. 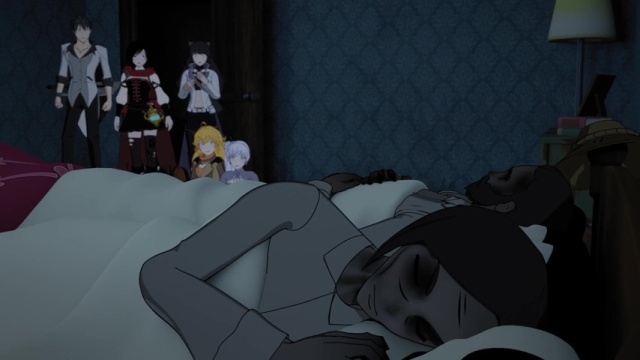 Now, the important thing here is to discover the cause of death. It is obviously not normal for all the people to die in the same way, so I guess we are going to have a mystery/terror arc for Ruby and the rest.

Nevertheless, there are two things I would like to highlight in this act, despite the fact they are not directly related with the plot itself, but with some of the characters. The first one is the painting Ruby watched when she entered in the house. 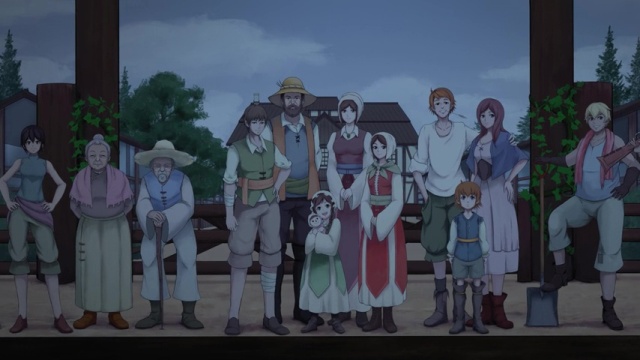 Rooster Teeth leaves nothing to chance, so I am pretty sure that painting is going to be important somehow in the future. Now, please allow me to share with you an interesting theory the renown youtuber inside Ruby’s community, Murder of Birds, commented in one of his last videos: Perhaps that farm was the home of Neo and Roman.

There are two kids in there who looks quite similar to them, plus the name of the farm, “Brunswick”, is also similar with Roman’s last name, so maybe he changed it. Murder of Birds also pointed out that the Brunswick name could also be related to the Brothers Grimm’s fairy tale of the headless horseman from Sleepy Hollow, which I totally agree by the way.

If you remember those legends, that horseman is depicted of having a pumpkin for a head, which is related to Roman’s emblem. In my opinion, there has to be more to know about that painting, and Murder of Birds’ theory would be a cool way of putting a lot of pieces together, which would also give a great background to Neo.

He also believes that Roman and Neo’s past is similar to Ren and Nora’s. Perhaps the farm suffered some calamity and they barely managed to survive it. That could be the reason they were so closed (I personally think that in a way, Roman and Neo’s relationship in general has a lot of similarities with Ren and Nora’s one), which would also explain why she is seeking for revenge. The new song’s lyrics are quite graphic in that regard. There are some other interesting things regarding his theory I did not mention, so I added a link to that video at the end of this review in case you want to check it out.

The second thing of the second act I would to pint out is Yang and Blake’s scene. It was huge for me that Ruby’s older sister finally decided to open and talk about her PTSD, and it was even bigger she chose Blake to do that. However, Blake’s reaction showed that she still has a lot to learn before things are ok between them. 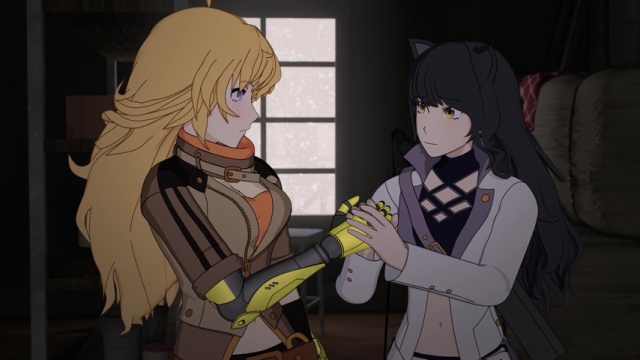 Blake still believes she has to do the things by herself. Telling Yang “I’ll protect you” was not reassuring at all. In fact, it sounded arrogant so I totally understand why Yang got pissed after hearing that. I only hope Yang does not lock herself away again.

Ok, now it is time to talk about the firs act. Oh boy, that was amazing. Not only we got Neo back, we also could watch one of the best fight scenes of the entire series. I have been telling you for a while now that CRWBY is getting more and more used to Maya, and the last fight scenes were a good example of that.

Raven and Cinder’s fight scene was fantastic, although it was closer to Dragon Ball’s fights style than to the Monty’s style many people missed (me included). However, this fight between Cinder and Neo was exactly what we had been waiting for ages. That sequence was so superb that I immediately compared it with the fight between Yang and Neo in the train (Volume 2). 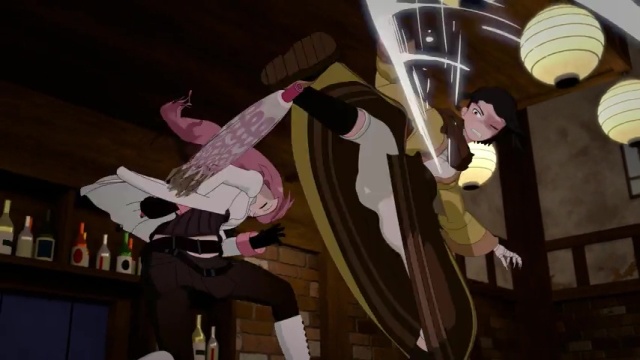 The entire choreography was astonishing, all the martial arts moves were outstanding, the animation was gorgeous, it also looked pretty smooth, and above all, the rule of cool was present the entire time. I just hope to see more fights like that in the future. CRWBY, a million thumbs up for you guys.

Of course, a good sequence has to have a good song and this one was no exception. The new song was great and its lyrics matched the moment flawlessly. The soundtrack of this volume is simply terrific. Jeff Williams is just getting better and better. 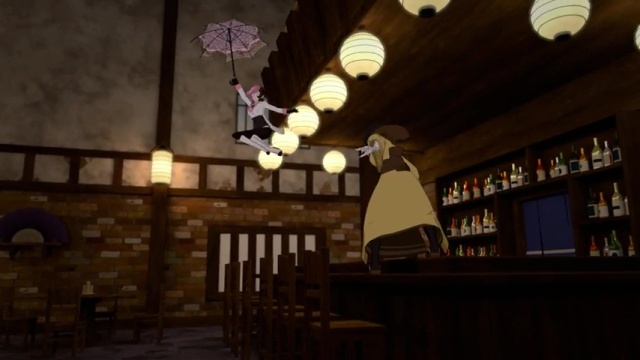 Sadly, it appears Neo is going to team up again with Cinder to kill Ruby so I guess she will still remain on the dark side, at least for now. I hope she will end up siding with Team RWBY. Please Neo, open your eyes!! See ya in my next review.