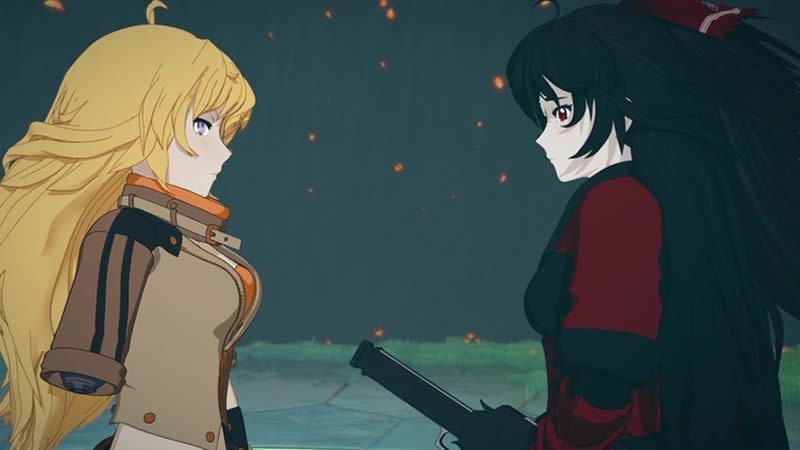 (Lechería, January 24, O’kuroku).- Considering all the things that happen in the finale of RWBY Volume 5, I think the most interesting one, by far, was Yang and Raven’s scene.

Being honest, this volume finale seemed anticlimactic to me. I believe episode 13 would have worked much better as volume finale. In fact, this episode in my opinion felt like a volume premiere.

Again, I have to say that the way Blake and Adam’s conflict was ended could have been better. The only good thing I can say about it is that Adam managed to escape, which could lead to a proper fight in the future.

The fight between Ruby and her crew against Emerald, Hazel and Mercury was barely shown; and that is one of the things this show needs to improve. I feel that the action scenes are losing relevance in RWBY. I understand that the plot needs to move on, and the characters need development. However, we cannot forget the action since that is one of the features the fandom loves about the show.

The battle between Cinder and Raven was epic; it was one of the best action sequences of RWBY. Nevertheless, the fight between Blake and Adam, and the fight between Ruby’s crew against Emerald, Hazel and Mercury deserved a better development.

Furthermore, I expected something more touching when Yang and Blake met. A good conversation perhaps? I wish that in Volume 6 they finally can sit and have a long talk. They need to make things up and that hug was not enough, at least in my opinion.

Ok, let us talk about what I think was the best scene of the episode. I was not sure if this time Yang and Raven would have a physical fight or a words fight. They both wanted the relic, and it did not seem easy to solve that issue without a big battle.

The battle indeed happened, but Yang surprised me being able to defeat her mother, and putting her in a sorrowful state, using only words. Of course, there were not just simple words. Yang made Raven to face the truth and realize how hypocrite her way of thinking was, and how coward she was no matter how she tried to hide it.

However, Raven delivered the first blow and Yang took it when she figured out that her mother had killed the last spring maiden. Sadly being a fan of Raven I have to admit that move put her in the same level as Cinder. There were many ways to handle the spring maiden yet Raven chose the cruelest and ruthless one. It was funny hearing her say afterwards that it was for mercy.

However, what happened next was even more shocking. Yang was merciless and said Raven was simply a coward who only do things according to her benefits. Raven then tried to play the mother of the year part by saying she was sure Yang could handle the fight. That was a poor way for justifying her betrayal. Fortunately, Yang could see beyond that nonsense and was able to make Raven saw that in the end, the only thing she cares about is how to survive no matter the price she has to pay.

Moreover, Yang did not waste time and tested that theory by saying to her mother that the best thing she could do was giving her the relic. Raven was afraid of Salem, and if she though having maiden powers put a target on her back, having the relic would be much worse because Salem would come after her with everything she has. However, Yang was willing to take her chances and face Salem.

Unfortunately, Raven let the fear decided for her so she followed Yang’s advice and left. Yang had won. Indeed, she finally had the relic. Nevertheless, it was interesting that she started to cry in that precise moment.

Regarding that, I think she cried because she realized the true meaning of Raven leaving the relic with her. Her mother preferred to throw her daughter into Salem’s claws in order to survive. Raven not only abandoned her again, but she showed she did not care what happened with Yang. For me, it made a lot of sense that the blonde girl understood everything in the very moment when she grabbed the relic of “knowledge”.

Of course, not everything was bad. At least Raven cried and apologized before leaving. I think that is important because it shows that Raven perhaps started to view things differently, and that could lead to her changing how she does things in the future. We cannot forget that she went to see Tai after leaving Yang, maybe she wanted to talk with him?

Summarizing, this episode looked more like a premiere than a finale, but still it managed to show us a great scene between mother and daughter. Well, Volume 5 is now over, and we will have to wait until fall for Volume 6. By the way, the winner of this round was undoubtedly, and by technical knock out, Yang. See ya in my next review.