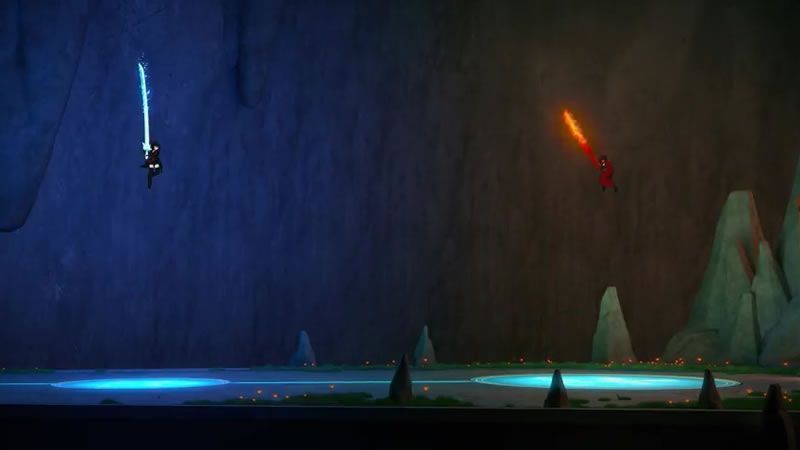 (Lechería, January 17, O’kuroku).- Rooster Teeth finally did it. The last episode of RWBY showed all the power of Maya to create gorgeous combat sequences. The result? Epic!.

Ok, we will talk about that battle in the final part of this review, but first it is mandatory to analyze the rest of the episode. Especially since there were some things that could have been solved in a better way. Yes, I am talking about Blake and Adam’s confrontation.

Honestly, I was expecting something better for those two. Since volume 3, that final fight was being set. However, at the end, its conclusion was anticlimactic. Firstly, because Adam barely had 10 people under his command, which makes me wonder about his leadership inside the White Fang.

This was supposedly a vital operation, so taking only 10 people with you is simply stupid. I know it was a sneak attack, but still, Adam should have had reinforcements nearby. Obviously, because of that Blake had the numbers with her (not to mention that Ghira and the police arrived too), which put Adam between a rock and a hard place.

Nevertheless, if Adam managed to defeat Blake in a 1-on-1 combat, then he would have been able to turn the tides. Unfortunately, here comes the second reason why I did not like that resolution. Belladonna defeated Adam in only one move and without sweating. What? I mean, What? When did Blake become so strong? When did Adam become so weak?

Perhaps Rooster Teeth wanted to end that arc fast, and they did not have the budget for two epic battles in the same episode (after all, the fight between Raven and Cinder was in an entire different league). However, that decision ended up in a lackluster closure for an arc they worked a lot developing.

Let us talk now about the rest of the fights (not including the main one). I do not know you, but I feel that all of them were solved too easy and too fast, especially if we consider what happened in the previous two episodes. Again, the word that comes to my mind at this moment is “anticlimactic”.

I am aware that in this kind of shows, the heroes at the beginning of the boss fights are overpowered. However, from that point to the moment when the heroes finally overcome all the issues and emerged victorious there is an important transition phase; and that phase should have both the proper duration and pace, otherwise, the whole battle will feel rushed and forced.

In my opinion, that is what failed here. The transition phase was too short and the pace was too fast, so we watched the heroes being pushed down, and almost in the next frame, the heroes defeated all the villains. We did not have time to process what was happening.

I could accept Emerald and Mercury being easily defeated since they both are not really strong warriors. However, Hazel is another thing. He is a Big Boss; he just cannot be defeated like that.

In fact, the whole thing about his semblance allowing him to feel no pain was lost because before we could process that revelation, the fight was already over and we needed to process other things. According to what we have been shown, Hazel, Tyrian and Cinder are the strongest warriors in Salem’s faction. Only Salem is stronger than them.

Now, Tyrian was defeated in a great combat against Qrow where Ruby’s uncle could have been killed. I will talk in a moment about Cinder, but that battle was even better. So, why Hazel had to be defeated in that way? I do not know, I think for the sake of coherence, he should have been defeated in a good fight too.

From the moment I knew Raven was the spring maiden, I just wanted to see her fight. That whole week seemed to be a year for me, but finally the time came and it was worthy… every single second. It was astonishing no matter how you look at it, the animation, the soundtrack, the choreography, and the resolution.

Rooster Teeth hit the ball out of the park and gave us a brilliant, epic and spectacular sequence. I want to congratulate all the animation staff and Kerry Shawcross who directed the episode, along with Miles Luna and Gray G. Haddock. Guys you did an outstanding job. You really did. One thousand thumbs up. Of course, I want to congratulate Jeff Williams too. The soundtrack was beyond awesome.

You know the best part? There is still room for improvement. This is not the roof for Maya regarding combat sequences. In some moments, it was hard to follow the action, and by fixing that, the final result will have a higher quality overall.

Ok, now about what will happen next I have two theories: 1) Cinder is not dead and she will appear again in the next episode where Raven is probably going to die trying to save Yang. I think mother and daughter will end up fighting each other, and Cinder is going to use that opening to launch a sneak attack.

2) Cinder is not dead, but she will not appear until next volume. Perhaps here wounds will be so grave that she may lose more limbs that will be replace by Grimm parts. I can see her becoming a monster.

Obviously, I do not think she is dead. It is too soon to kill Cinder. I am not saying it is impossible, but that would be a total waste. Besides, there was no body, and her powers were not transferred. You know how it works…

Of course, I also think that killing Raven would be a waste. However, since Yang is by her side, perhaps the blond girl could end up getting the spring maiden powers. Especially if Raven is killed by saving her, that way Qrow’s sister would have her redemption, and she would finally apply to the mom of the year contest.

In my ideal world, both maidens manage to get to the end game, and in that moment one of them, or both, die. Well, I guess we will find that out in a few days. See ya in my next review.