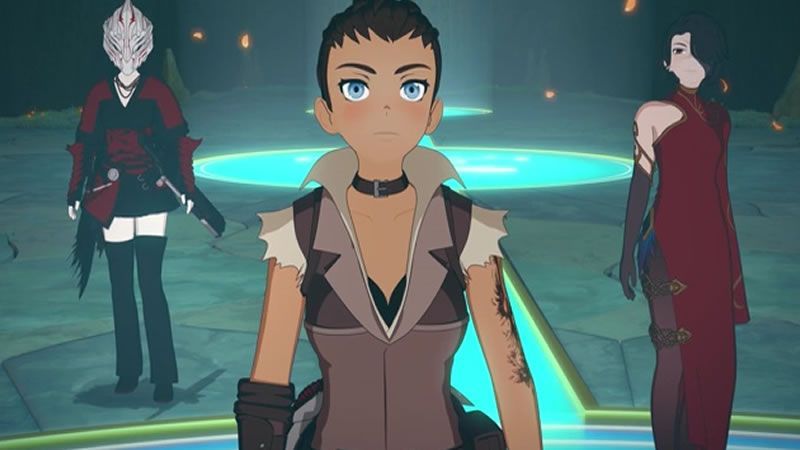 (Lechería, January 11, O’kuroku).- Astonishing, superb, brilliant. I could literally spend hours praising how things were done in these last two episodes of RWBY, and I would probably fall short.

Let us start from the beginning. In episode 11, several interesting things happened. The first one, the great way in which Raven appeared, nice way to show everybody what magic is, plus that act set the wheels in motion. Furthermore, as you may expect, the betrayal of Yang’s mother was a huge blow, and it affected the tone of the battle that followed.

Especially because after Ruby giving a powerful speech of love and friendship (it was cliché though) Raven answered by saying that Rose sounded just like Summer and then Qrow’s sister opened the portal to start the fight. That made me think that Raven does not really like her former teammate much.

What happened afterwards was the inevitable battle that was being set from the beginning of this volume, and let mi highlight Hazel big entrance. Regarding this sequence, I will say that, in general terms, I liked it very much. However, there were some pacing details in some of the choreographies.

Now, the directing was superb. I liked the way the used those wide shots to let us see all the fights in the same frame, that way we could always have the impression that those combats were happening at the same place. Many times, when there is more than one battle happening at the same place, the director focused in each combat individually, and in the end, it is hard to imagine that all the fights are happening inches apart.

However, in this case that was handled flawlessly by making wide shots, and especially by connecting the fights. For example, a stray bullet from one fight arrived to another fight, and it affecting it.

Now, inside the entire sequence there were great moments, such as Raven ordering Vernal not using magic to fight Weiss, which made sense after watching the next episode; Ozpin and Leo finally facing each other (by the way, nice weapon Leonardo); and the best moment of all, Jaune facing Cinder.

I am aware that Jaune had no way of beating Cinder, but I think she is the end of the road for him. Cinder became Jaune’s nemesis, and if she had not become that yet, she really did it in this episode. Asking him who he was after hearing what he said was beyond being mean… that was evil.

Of course, Cinder did not take her fight against him seriously at all; she just decided to play with him for a while. Unfortunately, for her, that attitude almost cost her life. Ruby used her silver eyes power and managed to neutralize Fall, and Jaune almost killed her. Only Cinder’s strong reflexes allowed her to dodge the fatal blow.

However, it was a pity that Ruby still lacked proper combat experience. One thing is fighting against Grimm, and other thing (completely different) is fighting against huntsman and huntresses. Almost immediately, Emerald knocked Ruby out and Cinder managed to recover. Afterwards, Fall entirely changed her attitude and released a strong killing intent.

Obviously, Jaune could not do anything and he was beaten. Nevertheless, before receiving the fatal blow he said he did not mind to die for the sake of his friends… bad choice of words… Cinder then instead of killing him decided to make him suffer by stabbing Weiss in the back with a spear, leaving the Schnee girl almost dead.

Did Cinder pick Weiss as a target by chance? I do not think so; Cinder took her time before striking. I believe that she knew that Jaune once had feelings for Weiss, and therefore she picked Weiss to hit him hard.

Cinder killed Pyrrha, mocked Jaune and almost killed Weiss. It is clear for me that Jaune and Cinder’s path will cross again for a closure. I know Cinder hates Ruby a lot, but Jaune also hates her greatly. Perhaps, the three of them will fight to death eventually. By the way, it seemed interesting to me the fact that Cinder did not try to kill Ruby during the battle.

Ah, I cannot finish this part of the review without highlighting how easily Oscar beat Leo. Of course, in defense of Leonardo I could say that his mind was shaken by finding out that Ozpin had returned, but even considering that, Leo’s performance was still dreadful.

Let us talk about episode 12 now. After the shock of watching Weiss being almost killed, the first impact was Cinder’s group finding out that Ozpin was back. That changed entirely the odds, and the bad guys finally started to be uncomfortable thinking things might not end up as they wished.

However, Hazel reacted differently. He was possessed by a huge anger, and a great hatred. During all these months, the fandom speculated about Hazel’s motivation for being with Salem, considering that their way of thinking is very different. Well, now we know, Hazel’s sister was a huntress under Ozpin’s wing, and she died during a mission. Hazel held Ozpin responsible, and thereafter he wanted to make him pay.

In that moment, Hazel released his true power, and we could see that before he was not fighting seriously against Ren and Nora (he said he did not want to fight them). Furthermore, we managed to witness something very interesting, for the first time, after Oscar accepted his fate, he and Ozpin were arguing.

Oscar wanted to fight to prove himself, and Ozpin wanted to fight because he knew best how to handle Hazel, who was a rival from another league. Finally, the professor took control by force and managed to face his rival directly.

Cinder took advantage of having the upper hand and decided to speed the plan by entering to the vault of the spring maiden, and then the second impact happened. Jaune finally released his semblance.

The fandom had speculated for years about Jaune’s semblance, and in recent months, the community finally seemed to reach an agreement. The most accepted theory was that he was a paladin; therefore, his semblance should be a healing one. This ended up being true. Jaune started healing Weiss managing to save her life, which allowed Ruby to focus in the battle.

I liked the way Ruby took control of the situation and started to lead team RNJR in order to fight back. They really needed their leader in that moment. So, according to Ruby instructions, Ren went to help Oscar, Nora stayed with Jaune and Weiss to protect them, and Ruby went to help her sister. What happened afterwards was one of the things that I like the most of this episode.

After being rescued by Ruby, Yang asked her if she was ok, and Ruby replied “No. I am angry”. Many of you could think that that line was irrelevant, but I think otherwise. That line meant a lot. We cannot forget that Ruby had always been a happy girl, who always tried to solve things by being kind. In short, she was innocent and naïve.

Considering that, watching her being angry was new. Back then, when Tyrian appeared, she was not angry, she was just being tough. Now, however, she was really pissed off and I believe that we are finally witnessing her development as a character, which we really wanted. Finally, she is starting to grow up, and let us see what happens from now on.

Finally, it is time to talk about the last scene. The scene that is the main reason of this review’s title. As you might expect, Cinder at the end betrayed Raven and Vernal, and in the right moment, she froze Qrow’s sister to kill her deputy afterwards. However, when she though she was going to get the maiden’s power, nothing happened.

It was then, when the third impact happened and the mother of plot twists was revealed. Qrow’s sister freed herself of the ice prison, and told Cinder that Vernal was not the Spring Maiden. At the end, Raven was the Spring Maiden, and although that fact raised many questions in our minds, I have to admit that it was a clever move from Rooster Teeth. I think it is safe to say that almost nobody expected that.

This secret was so hidden that not even Qrow knew about it. However, did Ozpin know it? Was that the reason why Raven left? Was everything Raven and Ozpin’s strategy to deceive Salem? Unfortunately, the stratagem was not perfect and Vernal paid the price. Let us see if she survives in the next episode. By the way, this explains why Raven told Vernal to not use her magic against Weiss. They had to keep the charade as long as possible.

Luckily, this volume is not 12 episodes long, but 14 episodes long. Otherwise, we would have to wait almost a year to see what happens. Now we only have to wait one week. By the way, now I think that Raven has a huge Death Flag above her. See you in my next review.