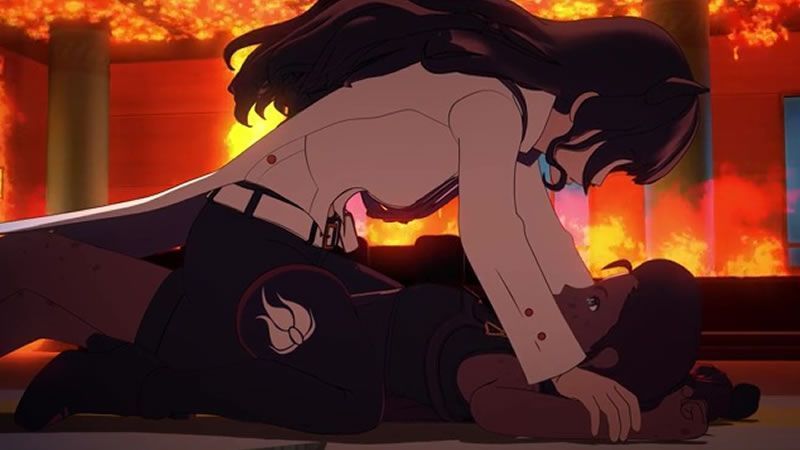 (Lechería, December 21, O’kuroku).- I have to say this is the first episode of RWBY, since I started watching the show, that I truly did not like. I feel it fell too short in all the things it tried to accomplish.

The humor was not funny, we barely had development in the plot, and the main event ended up being too anticlimactic. In fact, the combat sequence was not in the level we know CRWBY has.

Many words have been said regarding the fighting sequences in RWBY after dear Monty Oum passed away. However, considering the change from Poser to Maya, I think CRWBY managed to show an interesting new style, which had not stopped improving.

Nevertheless, in this sequence in particular I have to say that path was forgotten. It lacked fluidity, and there were many moments when the characters just remained still doing nothing, instead of taking action. The only case where that behavior was necessary was when Blake lured one of the brothers into the trap.

This sequence was not exciting at all. There is a huge gap between this fight and the fight between Qrow and Tyrian, or the fight between Team RNJR and the Nuckelavee. The voice actors performed very well, but the animation was not in the same page. This was evident in the facial expressions department, in my opinion this aspect was lacking. The characters’ faces were too plain.

Considering this was the resolution of Ilia’s arc, I feel it should be more epic. After all, there were a lot of feelings involved, and there were a lot at risk. Let me clarify something, I am not saying this because Blake’s parents survived, but because everything was solved very easily. I am aware there is one final act in Ilia and Blake’s arc: meeting with Adam… but still, this resolution did not have punch.

Regarding Qrow, Ruby and Ozpin’s scene, it barely added anything to the plot, except the confirmation that Ozpin’s cane is not a relic (this is considering he said the truth; I just do not trust him at all). Besides, the humor in the entire sequence fell short.

Finally, the scene between Raven and Lionheart did not added anything to the plot either, except the fact that Qrow’s sister may not be too convinced about betraying her brother and his party.

Summarizing, this was not a good episode, and, as I said, it is the first one I have not liked of the show. I hope this is only an anecdote, and next week RWBY gets back on track. See ya in my next review.