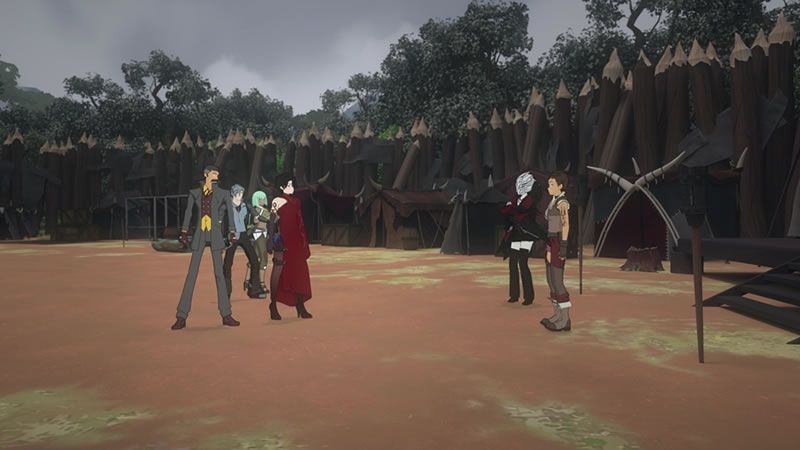 (Lechería, December 14, O’kuroku).- This episode of RWBY has made me think a lot of things regarding Raven. I still believe in her, but I have to admit that not as much as before.

In my review of episode 6, I said that after the meeting among Salem’s people and Raven there were three possible outcomes. Well, Qrow’s sister chose the third one: Pretending to become Salem’s ally. However, that move included a variable I was not expecting at all.

Demanding Qrow to be killed, as her condition for joining Salem’s forces was dirty, even evil. Especially, since we know that all is a charade for her to obtain the relic. Honestly, using Qrow as bait and throwing her own daughter to the fire just to save her neck was too much for me to process.

It is a fact that the way I look Salem will change from now on. Although I will wait for the attack on Haven before making my final judgment. Qrow’s sister still has an opportunity to make things right.

Now, Salem’s faction is not much better. Cinder is clearly letting herself to be dragged into Raven’s plot due to her hatred towards Ruby. In fact, Watts, who is a strategist, knows that that is a big mistake. He even distanced himself of that scheme, and I am pretty sure that if Cinder’s plan fails, Watts will use that to weaken her position with Salem.

Now, let us talk about the attack against Blake’s family. Ghira showed us in this episode why he was the leader of the White Fang. Moreover, I really liked the fact that Sun and Blake arrived on time to help. Rooster Teeth managed to avoid the cliché of Blake and Sun arriving after someone dies.

Of course, that does not mean Blake’s parents are safe now, but if they die, at least it will not follow the usual path. By the way, Sun now has the huge responsibility not only to earn Ghira’s respect, but also to prove he can be a dependable warrior. Since the beginning of the show, RWBY’s fandom have seen him as an useless guy, and despite the fact that in this volume he has been a great support for Blake, now he has in front of him his first big test.

As final remarks I will say that the fight between Blake and Ilia will be full of feelings, especially since now we know that the chameleon girl is in love with the neko girl. On the other hand, did Raven go to see Qrow? If she did. Why? To spy on him? To alert him? See ya in my next review.