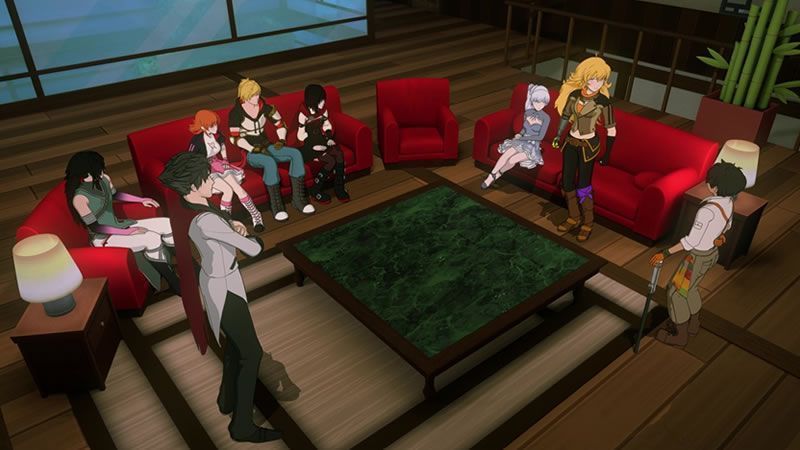 (Lechería, December 6, O’kuroku).- Today I am going to talk about two RWBY episodes that had many things to discuss. One confirmed the obvious, and the other set the wheels in motion.

Let us start with episode 7, which began in a light tone showing Ruby and her friends catching up. A priori, it could seem that those kind of scenes are better off the screen, but I personally do not agree with that statement.

I have always believed that you can have a lot of character development with those type of scenes, and here we have a nice example. Weiss could realize that there are people with more radical point of views when dealing with certain situations.

It was interesting to see Yang’s reaction when Schnee told what happened after her recital. Ruby’s sister actually asked if Weiss had let that lady have it. It was a brief moment that was immediately overshadowed by Nora, but still I think it is important to bring it back now.

Yang really wanted that woman to be physically punished as a penalty for being rude. Even Weiss was caught by surprise when hearing those words. Definitely, the blond girl does not fit in that classic hero pattern many of us have in our minds, and that could end up being important later. Not to mention that in a way, it balances Ruby’s naiveté.

Regarding Ren’s words, although they stated the obvious, I do not think they were out of place. I see him as a reflexive person, so for me it is natural watching him telling to the others how much they have matured since the last time they met. I know some people could see that as an attempt of the writers to lead the audience to notice that fact that they main characters have matured. However, I honestly think he was indeed talking to his friends, and only to them.

The next scene was one I was really waiting. It was the conversation among Yang, Ozpin and the others, seasoned by Raven’s words. However, it was not as harsh as I thought it would be. In fact, I think Yang showed too much naiveté.

I understand her behavior before because she did not believe what her mother said. Nevertheless once everything was confirmed, watching her acting the same seemed weird to me. Especially because it was obvious to me that she was upset at the fact that her mother was right.

In fact, Qrow’s attitude while trying to cut Yang by saying he and Raven wanted Ozpin to make them able to turn into birds should make Yang more cautious and sharp. Instead, she decided to join the cause asking Ozpin only to stop lying and telling half trues. All because Ruby decided to do it and her sister always knows what is right. Really?

I do not know. Asking someone who only talks via half trues, and who is great at keeping secrets which only reveals if he is discovered, to suddenly stop doing all of that is totally naive. Especially considering what they are about to face. Perhaps I am not being objective here; after all, I have not trusted Ozpin since the beginning.

By the way, the key point of this scene was undoubtedly the moment Ozpin confirmed he was the Wizard from the Maidens’ Tale. This was one of the most known theory of the fandom, so watching it become cannon seemed like a victory.

The rest of the episode showed that Raven is about to discover that if she wanted to stay away from the big battle, having one of the maidens in the tribe was a terrible strategy. Although, it also showed that Cinder is not willing to completely follow Salem’s instructions. After all, starting the conversations with Raven by attacking her tribe did not look as the best approach to win her as an ally. Will Watts use that against Cinder?

Now it is finally time to start talking about episode 8, which began showing Yang’s internal conflict with the way Blake left them (her?). It is true that previously, the attention was focused in she losing her arm and having PTSD. However, since Volume 3 finale it was clear that Yang held a grudge towards Blake.

That is why I found great that the issue was finally touched, especially to start preparing the ground for their reencounter, which will eventually happen. By the way, I believe “Freezer burn” shippers were extremely happy with Yang and Weiss’ scene. Not to mention that the scene showed how much Weiss has matured.

On the other hand, at this point I think it is obvious to say that Yang has serious anger management issues. This is something potentially dangerous that should be treated ASAP; otherwise, it could cause many problems in the future.

The other part of the episode had three points I want to highlight: The first one was Blake asking Sun to go with her to meet Ilia. If something could be seen as the proof of Blake’s change, it should be the fact that Blake avoided her usual behavior of putting friends aside, and decided to call for reinforcements before facing a potentially dangerous situation.

The second one was to discover that Ilia is in love with Blake. This explains a lot, and show that Ilia’s behavior is driven by spite (which was created out of jealousy). This is important since it puts the chameleon girl closer to Adam.

The third one was that Adam’s revenge has finally begun with the attack against Blake’s parents. I am afraid that Blake’s parents are going to die (at least one of them), considering the way that part of the story has developed. I truly hope to be wrong, though. By the way, Ghira and Kali are really a badass couple. I will missed them a lot if they die. See ya in my next review.