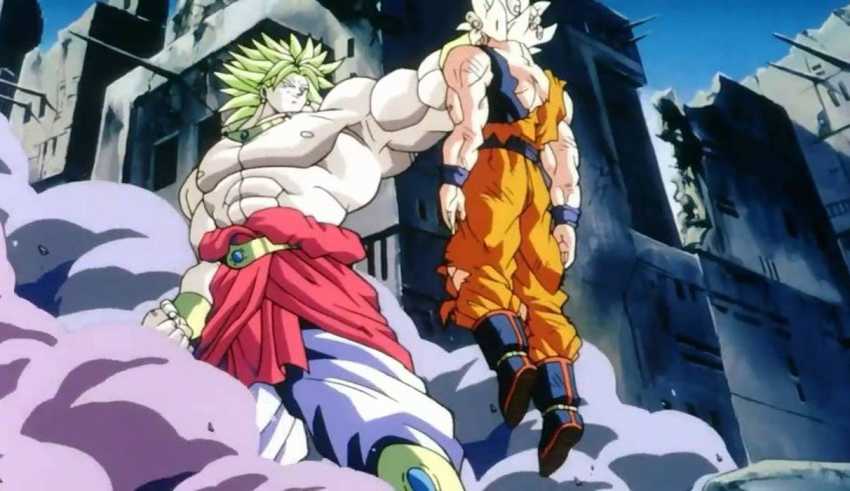 (Caracas, August 30. O’kuroku Webzine).- Everyone has a guilty pleasure franchise. We treat those like a kid who would forgive every mistake, or at least tolerate them to an extent. In my case those franchises are Dragon Ball and Sonic The Hedgehog. Now that the Dragon Ball Super movie has been confirmed to include a “new version” of the Legendary Super Saiyan Broly, I decided to watch the original movie one more time.

You want to know how many times I have seen that first Broly movie? 14 times. I have to admit that for some reason, i’m fond of Broly and this movie visuals. They are pretty, pretty good. Broly himself is a mixed bag.

However, I don’t blame the fans for loving Broly, despite his flaws as a character. Character Design flaws can be blamed on how they are treated by the script or visuals. There’s a reason why there are so many versions of Batman and other comic book characters that are bad. It’s all because of a bad script.

So, why is the first Broly movie such a mess?

The tone hurts this movie

Well,if the title didn’t spoil you, is because of Takao Koyama’s script.

However, while he created Broly, and we can’t deny the character’ popularity, I can’t help but think Koyama failed at delivering a good script. He tried too many things, and achieves little success in any of them: he tries humor, and it falls flat; he tries tragedy, and it falls flat; he tries drama with Vegeta, and you get a big Out-Of-Character moment.  Due to the script uneven tone, all you get is a big mess of a movie that doesn’t know what it wants to be.

At least the visuals in the debut of Tadayoshi Yamamuro as the Animation Director and Art Direction of Shinzo Yuki mask the film issues for casual viewers. However, I’m not a casual so I’ll list the issues of the movie:

The comedy is terrible

However, Koyama’s comedy is quite frankly terrible here. Maybe Koyama lack of experience with comedy was to blame? If you have seen his other scripts, you can tell the man has a thing for serious drama: Bardock and Future Trunks specials being tragedies. Even the first Cooler movie has a bit of this, with Cooler dying knowing he is to blame for Goku being alive.

However, the comedy in this film is just so out of place that it doesn’t work. We have things like Krillin being more worried about a karaoke song or Master Roshi being drunk for his entire stay in New Planet Vegeta. All of these during Broly frequent attacks, who the movie is trying to build up as this big horrying juggernaut.

Is kind of hard to take Broly seriously when in one scene we have him attack Goku in the middle of the night, and in the following scene we have Oolong and Roshi sleeping together in an awkward attempt at comedy. Or when Broly is beating the living hell out of Goku, but Goku looks more like a doofus getting tickled. And people say Super’s interpretation of Goku is silly.

Vagueness is the only source of anything

Is already a well known fact that Broly hates Goku because he cried as a baby. A lot. For like three hours. Right?

Well, not really. I’ve seen the movie many, many times, and Broly never states he wants to kill Goku due to some childish reason. However, I can also confirm that the movie is pretty vague regarding anything, due to a minimalistic script: we are shown, but we are not told what is happening.

We know Broly and Goku were born the same day, Broly was born with enough power to be a menace to the king of the Saiyans, and the king tried to kill him and his father, and thanks to his power, they managed to survive the planet’s destruction.  Then he went on destroying everything in his path because he was absolutely bonkers.

But the reason he hates Goku? Absolutely vague. The best we get is Paragus explanation, involving some kind of fate:

Broly, what the hell is the matter with you? Could it be Kakarrot?  Does this mean that Broly’s instintcs as a Saiyan have been awakened by Kakarrot’s power, and he is starting to overcome the limits of my control?

Damn! The threads of destiny have once again intertwined here, have they? The two infants, born on the same day and laid down in adjoining beds, no matter what, I must control Broly, or he will destroy the whole universe!

That’s the explanation we got: Broly was absolute bonkers from the get-go, and the reason he got out of Paragus control was because of a primal instinct towards Goku, or some crap about “fate” because plot-convenience.

While there is a line about Goku making Broly cry because “of his low power level”, this line is mostly a joke by one secondary character. Considering how vague the movie is with the flashbacks, and the awful sequel, I’m not surprised people think this is Broly’s motivation.

While a lot of you probably know that “Show, don’t tell” is the golden rule of scriptwriting when it comes to characters, I don’t fully agree with it, expecially in fantasy settings where characters have weird powers. We need someone to tell us what does this power do, what is happening, and so on. Jojo’s Bizarre Adventure and Hunter X Hunter do this very well.

This is because there are other moments where nothing is explained. For example, at one point, Broly starts to breath in pain and release energy because «his power was rising, overflowing». No one ever comments on this and is never followed upon except for some really terrible joke involving karaoke, as he acts like he’s in complete control for the rest of the film.

At some point we see him acting like normal before he is put the slave crown, implying he does act like a normal guy when not being a psycho, but this only happens for a single scene.

You would think the writer would expand on this, instead of relying on the «Movie villain formula» of just being bad for the sake of being bad.

Likewise, there is a minor inconsistency regarding the green hair color, but I choose to ignore it, thinking is based on an artistic licence by the art director that somehow stuck. Even material released after the Bio-Broly movie implies Broly always had green hair. This is also why Kale from Dragon Ball Super had it.  Write any neadcanon you want, but headcanons don’t save a bad script.

The attempt at drama falls flat

There is one thing I thank Koyama for adding, even if it was a flawed execution: Vegeta having an arc. Due to the overwhelming power of the legendary warrior, Vegeta is left scared, incapable of fighting because “they are doomed to be killed by him”. At the end, he has to sacrifice his pride to give his power to Goku to finally stop Broly.

Of course, i’m talking about the infamous Deux ex Machina of the “miracle finish”, or as some have called it: The ass pull punch.

However, Vegeta constant fear of Broly is quite frankly out of character for some, including me. Sure, Vegeta can be scared, as seen after his fight with Cell, but for him to simply give up the moment Broly buffs up instead of fighting back is quite forced and hard to swallow.

Sharing his energy with Goku and refusing at first is in-character though. Is all about his pride.

Sadly, since Broly is treated as a force of nature villain (Like most of the movie villains), he lacks an arc, making him quite underdeveloped. Which is a huge shame because unlike all the movie villains, Broly has a backstory that paints him in something of a tragic light. The fact he has a sad look on his face when not being a psycho possibly adds to it.

That’s not all, actually. According to the writer, there were some lines that were cut that would have also expanded Broly as a character.

Like the Title tell us, Broly is the strongest warrior. But if he’s the strongest , he can’t lose? But the only thing that Broly had is POWER , while Goku and Vegeta had a family and can die for them. I wanted to manage his loneliness and show that power is not enough to surpass love, friends and connections. Broly almost hurt me. Its a dark Character in the DB universe and I should have fought to impose my conceptions of this character. At the beginning I wanted him to say at the end » Who am I exaclty?» but they cut this sentence. If I could , I should have made him way more interesting.

Takao Koyama, in this article  (in French)

So, Koyama original idea for Broly went for Jiren, the Pride Trooper of the Tournament of Power. Still, the line of “Who am I exactly?” sounds quite interesting, but is only an afterthough. In the final product, Broly is a flat character with some cool ideas, and a pretty cool visual spectacle, but no substance to his character due to a messy script.

Some positives, and thoughts on the Broly reboot 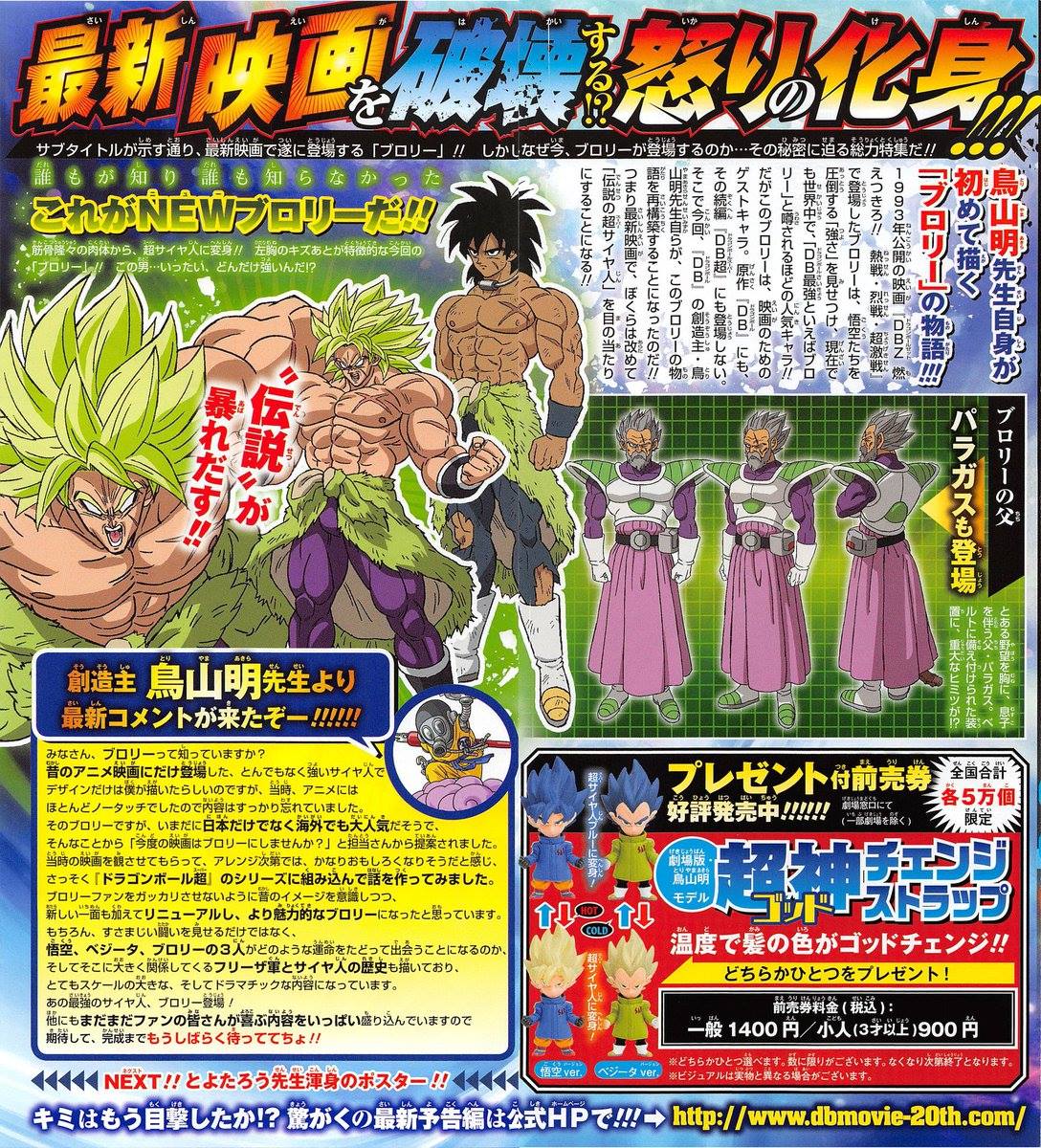 With all said and done, there is something I can’t deny: The movie is visually pretty. This is the debut of Tadayoshi Yamamuro in Dragon Ball, and he was a beast in his prime. This movie has some great storyboarding, and an excellent soundtrack. While Akira Toriyama didn’t had a hand in anything involving the movie besides designing the character, his design of Broly is among my favorites in the franchise.

However, since “Dragon Ball Super: Broly” will include a new version of the character to incorporate him in the canon of the series, I can’t help but be doubtful about the execution. Broly’s idea is not bad, but any good development he could have was torn apart by the completely horrible sequel of Second Coming, which is responsible for most of the infamy the character is known for (Being a walking brute who can only say “Carrots”)

Dragon Ball Super, wanting to capitalize on the popularity of the character, created Kale, but her development wasn’t that great due to a inconsistent creative team that relied too much on references to the old work (Thus, ruining Kale any unique development and just turning her into a uninspired copy-cat).

Possibly for consistency sake (Since Kale exist, Broly should too), Toriyama’s editor asked him to make Broly canon. Toriyama said the following:

So, about Broly. I hear these days, he’s still very popular not only in Japan, but also overseas. Based on that, my editor suggested we have Broly appear in this next movie. I went ahead and watched the movies from back then, and I felt this could be quite interesting once I rearrange some things. I got right to work trying my hand at a story that incorporates him into the Dragon Ball Super series. While keeping in mind Broly’s classic image so as not to disappoint his fans, I updated him and added a new side to his character, and I think this has resulted in a more fascinating Broly.

I’m curious about how Toriyama will handle a character he didn’t create, as he is the scriptwriter for the new Broly movie. But my expectations are absolutely low, due to his vague outlining in Super, responsible for the Tournament of Power inconsistent writing. I know from a good source, that the animation of the next movie will be a delight. But the writing? I’m not hopeful. History will possibly repeat itself with a visually pretty movie, but a mediocre script.

A bit shout out to the Dragon Ball Sakuga group in Discord due their help with information about the creator team.